Well it's almost that time of year. Yep, hot water bottle season here in chilly San Francisco. The rest of the country is warming up and gearing up for summer. We here in the Bay Area will be getting ready for long cold nights and foggy days. I usually spend the summer in San Francisco dreaming of cold beers on hot summer nights, lazy days by the pool, peach picking in August and 4th of July picnics. However, my reality is trying to stay warm in my house when it's not quite cold enough to turn on the heat. Besides, I have a mental block to turning on the heat in July...it just feels wrong. What does feel right is a hot water bottle.

My childhood memories are dotted with someone snuggling a nice warm bottle next to my feet. Vague comforting memories of somebody taking care of me and tucking me into bed with that bottle and teddy bear. Steaming hot at first with a towel wrapped around to ward off burns. Then by morning the hot water bottle would have cooled off until it was simply lukewarm to the touch.

Occasionally when the cold gets to much for me I still boil up a hot water bottle. It's just about the most comforting feeling in the world for me, but I want to upgrade. I've found a cashmere cover! It makes the mundane just a little more special. Obviously I must get the pink one. 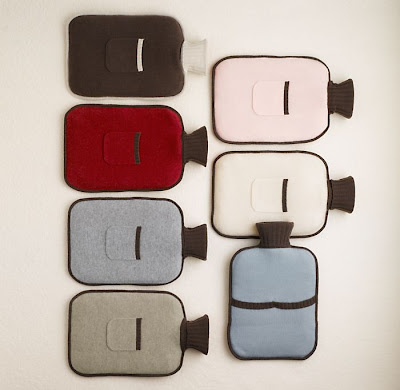 I've been missing springtime in Virginia so much recently. That always used to mean sitting on the front porch watching the traffic go by. I would love to do that from this swing. So adorable!

Happy Belated Easter! I must confess that although it was Easter Sunday and a beautiful day here in San Francisco I wanted to stay home instead of partaking in everything the city has to offer. It was so tempting to think about the Cherry Blossom Festival, of walking in Golden Gate Park, or simply having brunch with my friends. However, the thought of sleeping in late and spending a lazy Sunday at home was even more tempting than venturing out. There's nothing I love more than being at home all day and cooking up a storm. I started out the day with this: 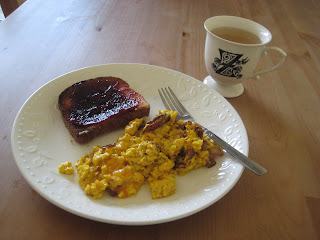 Yummy scrambled eggs with bacon and chedder and some tea. Then I moved into the serious cooking. Part of the reason why I was so motivated to cook was, because I have a massive amount of food in my fridge at the moment. There's tons of extra bread that was given as a gift to my roommate and I have a whole slew of vegetables lingering in my fridge from my CSA food box. I needed a way to use up the extra bread and veggies before they spoiled. See the downside of getting a food box is I end up with a variety of veggies that I don't particularly like and don't know what to do with. They end up rolling around at the bottom of my crisper drawer until they are almost spoiled then I feel guilty and throw them into a stock pot to make veggie broth. Then I have lovely broth I can use instead of chicken broth in recipes!

This time I used the resulting veggie broth for my split pea and ham soup. It was so amazingly delicious! I love soups and this has to be one of my favorite recipes. So the day ended with this lovely bowl of soup: 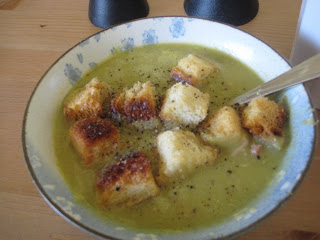 The croutons on top are the croutons I made from the stale bread. The other half of the loaf, became breadcrumbs to be used in another recipe. This was so good at the end of the day curled up reading. I hope you'll try this too.

In large stockpot melt the lard or butter and saute the onions for 10 minutes on medium heat until soft and translucent. Add in the rest of the ingredients and simmer for 1 hour. At the end of the hour remove the ham and set aside. Use a hand blender and blend the soup or blend in a regular blender in batches until smooth. Add ham back into the soup and stir. Serve while still hot.