Oh wow I went to ikea the other day and I saw this pinkish-gold vase pictured below. Then my heart fluttered and I started to drool. I have seen this vase in various blogs for about a year now and totally fell in love with it. Something about that pink color with the gold shimmering over it and the graceful bulb shape makes it so pretty to me. However, it seemed like it was only available in Europe! So it seemed like the vase would never be mine, but now it's here in the states and available in Ikea stores though I couldn't find it online at their website though it is on the designer's Hella Jongerius website. I have a birthday (a very big one) coming up though and I'm going to put this vase on my wish-list. Soon my pretty one you'll be mine. 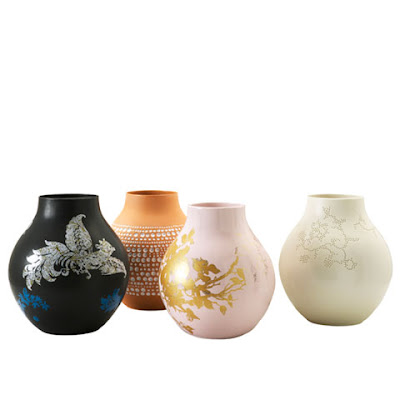 Ok so Lunar New Year's has actually come and gone, but I still wanted to share with you my little celebration. The actual date of Lunar New Year's this year was February 14th, but celebrations go on for a few weeks afterward as people spend the first few weeks of the year visiting family and friends. Honestly I did not have a huge set of celebrations, but I did set up a ancestor shrine to commemorate my forefathers. 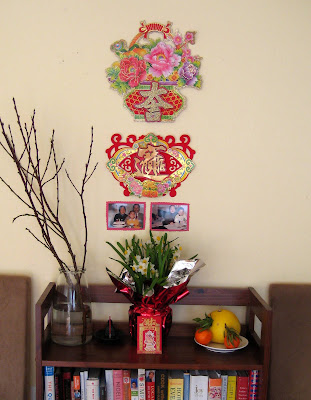 Ancestor Shrine for Lunar New Year's 2010
I also had a little dinner party of people the day after Lunar New Year's with a few friends where we ate and talked. I made my friends wontons like my family used to do during the holidays, but sadly forgot to take pictures of me making them. I promise next time I'll document the process so that I can share with you. I never remember to whip out my camera when I need it and it's something I need to work on. Here they are though and seriously I can't tell you how good they were. I adore wonton soup and can eat it for breakfast, lunch and dinner. Luckily they freeze spectacularly well so that's exactly what I did for a few days. 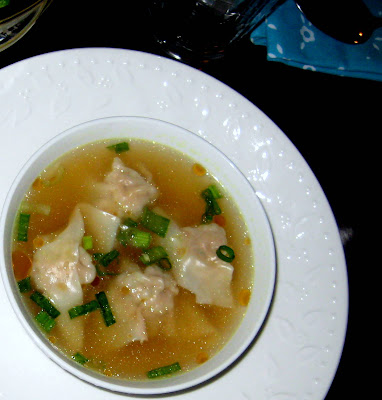 Homemade Wonton Soup
Then last week celebrating the end of Lunar New Year's I went with a friend of mine to a little Shanghainese restaurant here in the city called Shanghai House. I've been here several times and it's probably one of my favorite restaurants in the city for the simple reason that it's food like my family made when I was growing up. This time we had the tea-smoked duck that tasted like ham, but with duck skin. Can we say delicious? We also had dry-fried green beans which were so perfectly cooked crisp-tender and had such a nice rich dark sauce. Of course we had Shanghai Dumplings or Soup Dumplings which are little dumplings that are filled with soup when you bite into them. You eat them with vinegar which balances the richness of the filling with the tang of sourness. They are dumpling perfection when done well and Shanghai House does them really well. Then the last dish and my favorite was the dessert which were black sesame balls in a fermented rice wine pudding. For me it's really a homey taste as I used to have it for breakfast in the morning. There's nothing like eating this hot sweet soup in the morning and biting into this chewy dumpling filled with sweet sesame filling. Meals like this make me wonder to myself why do I not cook Chinese at home more often? 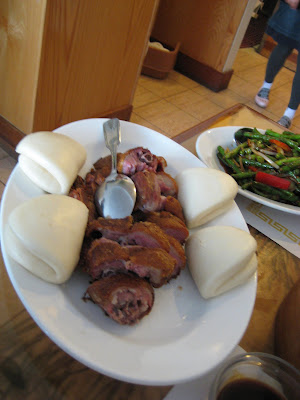 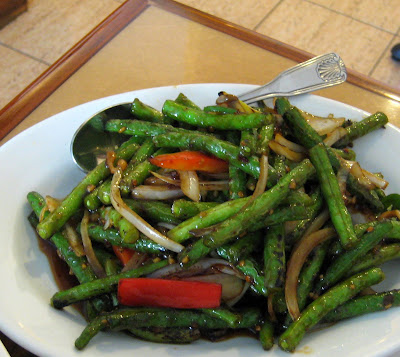 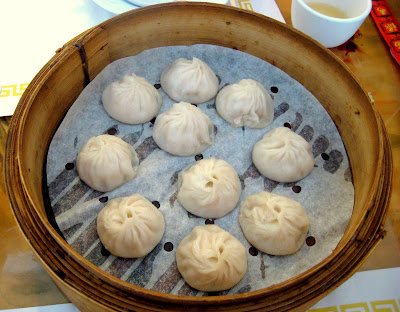 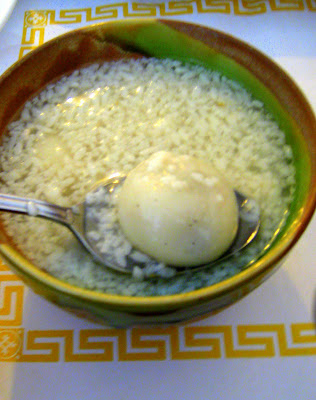 Also for Lunar New Year's it's tradition that little red envelopes full of money are handed out to all the singles for their prosperity in the upcoming year and one of my friends handed me the cutest red envelope I have ever seen. She also folded a little dollar bill into the shape of a heart. Seriously one of the sweetest gifts I have gotten in ages. So that's what I leave you with a little love from one of my friends to start off the New Year. 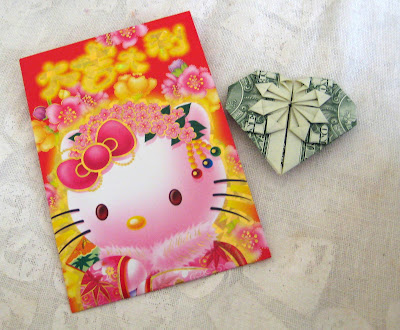 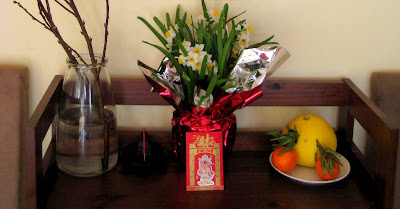 I wanted to share a little private moment with you today. See most of you know it's Valentine's Day today, but it's also the Lunar New Year's today. This means that for the Chinese it's a day to celebrate the New Year and to pay your respects to your ancestors. So I wanted to share a little sneak peek at the altar that I put together this year.
Posted by Miss Z at 2/14/2010 10:33:00 PM No comments:

I was over at a friend's house for dinner the other night and she had this poster ready to go up on the wall. 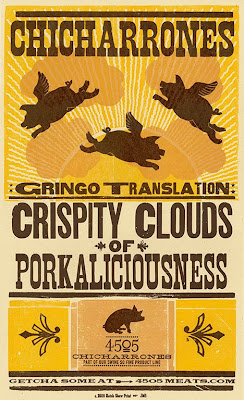 I am so jealous! I want one for my kitchen wall and to proclaim my love for pork. Yes, I love pork in all it's forms from bacon, lard, prosciutto, ham, fatback, pork chops, pork jerky, pork dumplings etc. What's not to love about an animal that provides so many ways to be delicious. Recently my obsession is with Chicharrones from local Chef Ryan Farr which really are "crispity clouds of porkaliciousness." I have been buying them at every opportunity I get and eating them slowly so that I can enjoy all their porkaliciousness.

To illustrate my love of pork let me tell you about my friend Nick. Nick is a dear friend of mine that had to move far away to Canada, but before he moved he gave me a bunch of stuff from his apartment that he had to leave behind. One of the things he gave me was a jar of lard that he had saved from his bacon! Now for most people that might be kind of gross, but I thought oh how sweet of him to think of doing that for me

Well I'm back now! After a crazy holiday season I'm ready to emerge into the world again. Right before Thanksgiving I came down with a nasty cold, then as soon as I recovered from that I got hit by the flu as well and then to add insult to injury I managed to get food poisoning about a week before Christmas. So I was incredibly ill and like everyone else dealing with the craziness of the holiday season. Honestly I was so stressed out right before the holidays that I could barely keep sane much less do any leisure activities such as cooking.

The holidays were amazingly happy time for me. I spent Thanksgiving with some wonderful friends in San Francisco and I went on vacation in Phoenix, Az to visit my Mom for Christmas. Some highlights of the season included a truly yummy turkey, video games with the family, Harley rides in the desert and best of all long talks with Mom. As much as I was stressed out before the New Year I am now feeling relaxed and renewed. I'm also feeling so grateful that 2009 is over as it was year that was filled with trials for me. I'm so happy to be starting over again in 2010 in a new year and decade.

Now I know that for most of you that the New Year has already started, but for me it's only partially begun as I wait for the Chinese New Years which this year falls on February 14. It's going to be a doubly special day as it will be Valentine's as well as New Year's. I'm so excited as I love both holidays. I adore Chinese New Year's, because it connects me back to my roots and it's such amazing food. As for Valentine's I love it, because I'm incredibly sentimental and I like the thought of people taking the extra effort to show their love. Of course we should do it every day, but there's something sweet about a day devoted to love. Plus, all the products for Valentine's is freaking adorable hearts and pink all around makes me a happy girl.

Back to Chinese New Year's it's always celebrated on a different day each year depending on the lunar calendar. There's traditional foods and customs to be followed to bring luck and prosperity into the New Year. None which makes me happier than the Mooncake which is a Chinese pastry that is filled usually with red bean paste. As a child I knew that mooncakes were hard to come by living in Virginia and they were only around during holiday season. Getting to have a mooncake was a luxurious treat especially if it was one with a salted egg yolk in the middle. Luckily I now live in a city that has a large Chinatown and I can go to a bakery to fufill my craving for a mooncake. I made a special trip two days ago to Golden Gate Bakery in Chinatown which is largely acknowledged as the best Chinese bakery in town for a lotus seed paste mooncake with salted egg yolk. 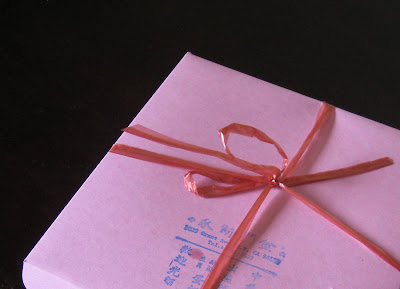 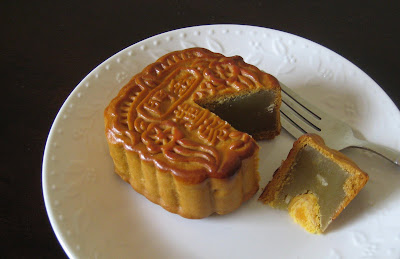 I was so happy carrying that pink box out the door and home that it was worth the half hour wait in line to get into the bakery. Then getting a taste of the first mooncake of the season starts my New Year's off in the right direction.
Posted by Miss Z at 1/12/2010 10:08:00 PM No comments: