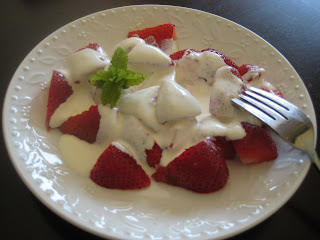 Yep if you aren't jealous of this picture you should be. I just had it for a little mid afternoon snack slash treat for myself. Fresh organic strawberries with mint from my balcony and homemade creme fraiche. If you haven't tried creme fraiche please do yourself a favor and try it. You can eat it the way I did over some fresh fruit or in place of sour cream on top of some soup. I have some white peaches in my fruit bowl that are going to be smothered in this creamy treat later on.

Anyhow, I've been reading a lot about food lately and in one of book full of tips I read about making your own creme fraiche. I remember none of the other tips of that book nor the book name, but I remembered that you can make your own creme fraiche with a little bit of buttermilk and whipping cream. I HAD to try it. Creme fraiche is a thickened creme that tastes somewhere like a yogurt and a cream cheese mixed together. It's sold in some stores, but it's expensive if you can find it. I've seen it called for in recipes for fancy appetizers, on soup, and for desserts. I had it first with some potato pancakes and caviar. Occasionally I would see it in the store and stare at it longingly, but remind myself that non-fat yogurt is healthier and cheaper. Only problem is now that I know how to make it easily and it's not expensive.

So you know what this means for me? Fruit smothered with cream all summer long. Then I plan on licking the bowl after the fruit is gone to get that last bit of creme fraiche up...after I can't let it go to waste. Oh yes. I promise I only do that in the privacy of my own home, but I know you've done it too when something was too good to resist.